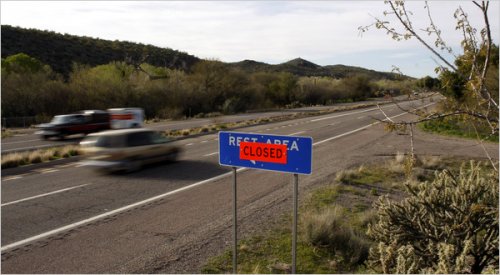 PHOENIX — The people of Arizona kept their upper lips stiff when officials mortgaged off the state’s executive office tower and a “Daily Show” crew rolled into town to chronicle the transaction in mocking tones. They remained calm as lawmakers pondered privatizing death row.

But then the state took away their toilets, and residents began to revolt.

“Why don’t they charge a quarter or something?’” said Connie Lucas, who lives in Pine, Ariz., about a two-and-a-half-hour drive from here. “There was one rest stop between here and Phoenix, and we really needed it.”

Arizona has the largest budget gap in the country when measured as a percentage of its overall budget, and the Department of Transportation was $100 million in the hole last fall when it decided to close 13 of the state’s 18 highway rest stops.

But the move has unleashed a torrent of telephone calls and e-mail messages to state lawmakers, newspapers and the Department of Transportation decrying the lost toilets — one of the scores of small indignities among larger hardships that residents of embattled states face as governments scramble to shore up their finances.

“People in this state are mad about this,” said State Representative Daniel Patterson, a Democrat from Tucson who has sponsored a bill that would allow other entities to reopen and maintain the rest stops. “This bill may have the broadest support among members of any bill this year.”

Some residents see something sinister in the closings. Betty L. Roberts, who lives in Sun City, west of Phoenix, said the topic was a hot one among her friends.

“I honestly think they are setting us up because they want to do a tax increase,” Ms. Roberts said. “I think by shutting down things people want, they will give us one.”

Arizona is not alone in singling out toilets. Colorado, Georgia, Vermont and Virginia are among states that have also closed rest stops, though Virginia’s new governor, Robert F. McDonnell, has vowed to reopen 19 stops that closed last year.

“It’s a safety problem, not only for us but car drivers,”