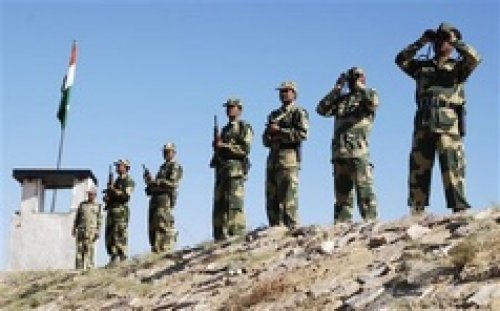 NEW DELHI/ISLAMABAD (Reuters) - Indian Prime Minister Manmohan Singh met military chiefs on Friday and Pakistan cancelled army leave and moved some troops from its western border despite both sides playing down the threat of war over the Mumbai attacks.

With tension rising sharply over last month's attacks, in which 179 people were killed, China also emerged as a potential peace broker after Foreign Minister Yang Jiechi unexpectedly called his counterparts in New Delhi and Islamabad.

An official from Singh's office said the prime minister had discussed tension with Pakistan during a scheduled meeting about military pay with the chiefs of the army, navy and air force.

"The prime minister met the tri-services chiefs to discuss the pay commission issues but obviously the situation in the region was also discussed," said the official, who asked not to be identified. There were no other details.

Many analysts say it is very unlikely that the tension will

descend into war. The nuclear-armed rivals have fought three wars since independence in 1947 and came to the brink of a fourth in 2002 after an attack on the Indian parliament.

While there had been no significant troop movements in either country, military officials in Islamabad said army personnel had been ordered to report to barracks and some troops had been moved off the Afghan border.

"A limited number of troops from snow-bound areas and areas where operations are not being conducted have been pulled out," said a senior security official who declined to be identified.

The official declined to say where the troops had been moved to, citing the sensitivity of the issue, but Pakistani media have reported some troops had been redeployed to the Indian border.

The movement of Pakistani troops off the Afghan border is likely to be seen with dismay by the United States which does not want to see Pakistan distracted from the battle against al Qaeda and Taliban militants on Pakistan's western border.

India, the United States and Britain have blamed the Mumbai attack on Pakistan-based Islamist group Lashkar-e-Taiba, set up to fight Indian rule in the disputed Kashmir region.

Pakistan has condemned the Mumbai attacks and has denied any state role, blaming "non-state actors."

It has offered to cooperate with India in investigations but denies Indian claims that it has been handed firm evidence of links to militants in Pakistan.

At the same time, Islamabad has warned that its desire for peaceful coexistence should not be taken as weakness and that it will defend itself if attacked.