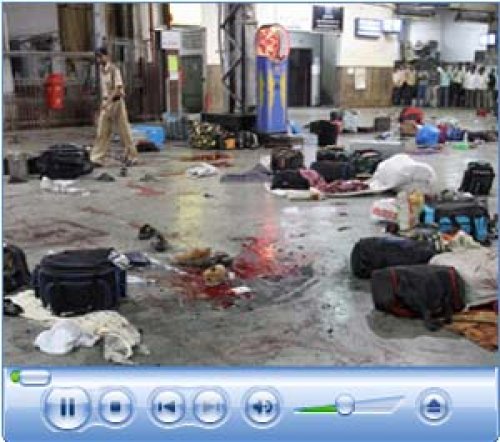 Mumbai, Nov 27: The seize in Mumbai is headed for a showdown, with the National Security Guard (NSG) gunning down six terrorists, thought to be LeT operatives, while the remaining four terrorists have taken around 40 people as hostages inside the Taj Hotel.

Even at the Oberoi and Nariman House, many people are feared to be taken as hostages. One more very loud explosion has been reported from the Oberoi.

Nine foreigners are among the 100 killed in the attack that also left over 300 people injured.

Developments By The Minute>>

1.27 pm: Intelligence reports had warned that there could be a possible entry of terrorists into Mumbai through the sea route, a top police official claimed.

1.27 pm: The Gujarat Police said the Mumbai terror strike was similar to the Akshardham Temple attack of 2002, and they are carrying out checks and searches as a precautionary measure.

1.27 pm: Handgrenades lobbed from Oberoi Hotel in south Mumbai where terrorists are holed up.

1.27 pm: Expressing serious concern over the Mumbai terror attack ,the AICC General Secretary Rahul Gandhi said it was an attack on the country and not only on the commercial capital, Mumbai.

1.22 pm: President Pratibha Patil speaks to Maharashtra Chief Minister Vilasrao Deshmukh to enquire about the situation in the metropolis.

1.19 pm: One more body was brought out of the Taj Mahal hotel, taking the total number of bodies removed from there to three.

1.15 pm: Pakistan’s Foreign Minister Makhdoom Shah Mahmood Qureshi termed the attacks as “barbaric” and extended support to the Indian government. Notably, today’s meeting of Qureshi and Union Minister for External Affairs Pranab Mukherjee at Chandigarh has been cancelled in the wake of the attacks.

1.10 pm: US Ambassador to India David Mulford offers condolences to the families of the victims of Mumbai terror attacks and said Washington was ready to provide all possible assistance to the Indian government.

1.01 pm: "We have total clue about the attacks," says Maharashtra Deputy Chief Minister R R Patil. However, he has refused to give details.

12.55 pm: A day after the terror attack on the historic Chhatrapati Shivaji Terminus which left over hundred killed, services on the Central Railways were restored to normal today, officials said.

12.39 pm: One terrorist holed up inside Nariman House in south Mumbai killed, says police. Six more ultras suspected to be inside the building.

12.39 pm: Dubbing the terrorists as enemies of the country, Congress president Sonia Gandhi said that terror attacks in Mumbai posed a challenge to the entire nation and would be met resolutely.

12.18 pm: Rs 5 lakh compensation to be given to the kin of those killed in the terror attacks, says Maharashtra Deputy Chief Minister R R Patil. Rs 50,000 will be paid to the seriously injured.

12:16 pm: Two IL-76 aircrafts and four AN-32 aircrafts are ready to take off from Palam Airport in Delhi to assist operations going on in Mumbai.

12.14 pm: Defence Minister A K Antony calls a high-level meeting of the armed forces in the wake of the Mumbai terror attacks.

12.10 pm: Two bodies brought out of terror-struck Taj Hotel in Mumbai and taken away in an ambulance.

12.01 pm: At least four terrorists were holed up in the Taj Hotel where 40 to 50 guests were still trapped, says Major R K Hooda, General Officer Commanding of Maharashtra, Goa and Gujarat.

11.52 am: Nine suspects have been arrested and interrogated, R R Patil said.

11.40 am: R R Patil refutes reports of any ransom demands being made by the terrorists holed up in the hotel. He is unsure of the exact number of hostages in the hotel. Earlier, a terrorist, identified as Sahadullah, holed up inside Mumbai's Oberoi Hotel told a news channel that he seeks release of all “Mujahideens held in India” in exchange of the freedom of hostages inside the hotel.

11.21 am: Two top US intelligence officials are believed to be among dead in the firing at Taj hotel.

11.20 am: Army’s General Officer Commanding reaches the Oberoi on instructions from Prime Minister.

11.20 am: Commandos begin firing at Nariman House. Four terrorists thought to be holed up inside.

11.16 am : Shots heard from the Mumbai headquarters of the ultra-orthodox Jewish outreach group Chabad Lubavitch that was seized by the gunmen overnight.

11.15 am: A child of foreign nationality and an Indian maid seen coming out of Nariman House in South Mumbai.

11.05 am: LK Advani terms the Mumbai attacks as the biggest in India. Calls for unity at the hour of crisis.

10.45 am: Indian Navy’s Vice Admiral Bedi said that around 4-5 terrorists are still holed up inside the hotel, along with 40 hostages.

Earlier, at around 7.30 am, minutes after the NSG commandoes entered, fresh firing was heard as reports claimed that NSG commandos have already reached the upper storeys of the hotel.

Of the hostages, some are feared to be foreigners. The NSG team is also looking to evacuate as many people as possible to minimise causalities.

A bomb has been diffused that was found this morning near Taj. Fire and smoke is still seen billowing from the hotel as firemen struggled hard to rescue over 100 people still trapped inside. While NSG operation was on in the old building, fire brigade personnel were trying to douse fire in the new wing.

Curfew has been clamped around Taj and at Gateway of India.

Meanwhile, a suspected terrorist is being interrogated, who was held this morning. He is said to be associated with Lashkar-e-Toiba (LeT), a militant group based in Pakistan.

The recent reports claim that firing is still on at the Nariman House.

The commandoes have also reached Trident Hotel (formerly Oberoi) in South Mumbai to flush out terrorists holed up there. A fresh blast has been heard from the hotel.

Terrorists have, reportedly, positioned themselves on the 19th floor of the Oberoi hotel.

According to reports, six terrorists have been killed until now, two each in Taj, Girgaon and Oberoi.

Chief Minister Vilasrao Deshmukh said five police officers including Anti-Terror Squad chief Hemant Karkare were killed in one of the worst terror strikes in the country's financial capital that in all claimed the lives of at least 14 police personnel.

Maharashtra Deputy Chief Minister R R Patil said that there was not any intelligence on the incident. According to Patil, nine suspected terrorists have been arrested.

Little known Deccan Mujahideen has claimed responsibility for the terror strikes in e-mails sent to some media organisations.

Schools and colleges across the metropolis will remain closed today.