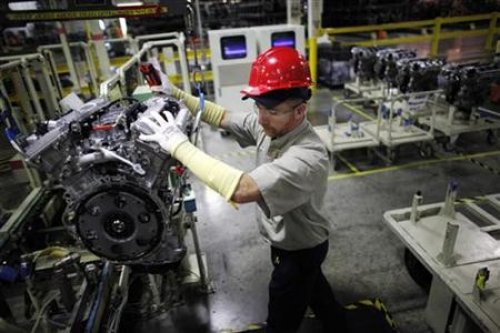 Factory orders rose 0.8 percent in May, the Commerce Department said Tuesday. That followed a downwardly revised drop of 0.9 percent in April.

The increase pushed factory orders to $445.3 billion. That's almost 32 percent higher than the low point during the recession, reached in March 2009.

Much of the increase was driven by a 36.5 percent increase in orders for aircraft, a volatile category. But there were also signs of strength in areas that had

slowed sharply in the previous month.

Orders for so-called nondurable goods, such as food, clothing, oil, and plastics, fell 0.2 percent in May. But that was partly because oil prices dropped.

Until this spring, manufacturing had been one of the strongest sectors of the economy since the recession ended two years ago.

Economists largely blamed the weak period on high gas prices and the impact of the March 11th earthquake in Japan, which led to a parts shortage that has hampered U.S. manufacturers.

Those factors appear to be easing. Gas prices have come down since peaking in early May. And the manufacturing sector expanded at a faster pace in June after slowing sharply in May, according to the Institute of Supply Management.

"There are encouraging signs that the second half will likely to get better, particularly for manufacturers," said Ryan Sweet, an economist at Moody's Analytics.

A recovery in the auto sector is one reason production is picking up. Japanese automakers with plants in the United States, such as Toyota Motor Corp., Honda Motor Co. and Nissan Motor Co., sharply cut production in the spring. But they are restoring output. Toyota executives say their North American factories will be back to 100 percent by September.