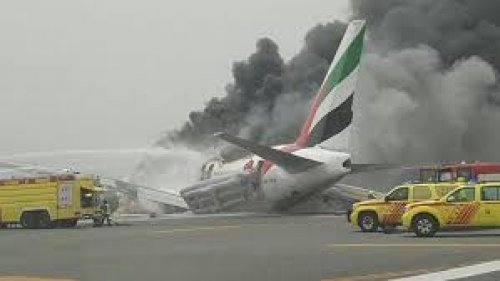 Hundreds of passengers had a miraculous escape after an Emirates flight en route from southern India burst into flames after skidding as it landed at Dubai International Airport Wednesday.

Dramatic images showed fire then thick black smoke billowing from the stricken Boeing 777 shortly after it came to a standstill.
There were no fatalities among the 282 passengers and 18 crew members on board, Emirates said.
"Emirates can confirm that today, 3 August 2016, flight EK521 traveling from Trivandrum International Airport in Thiruvananthapuram, India to Dubai has been involved in an accident at Dubai International Airport," the airline said in a statement.
The majority of those on board were Indian nationals, it added.
The aircraft left Trivandrum International Airport at 10:19 a.m. and was scheduled to land at 12:50 p.m. in Dubai.
Once emergency response teams managed to extinguish the fire it was clear how deadly this accident could have been: the entire top half of the aircraft's fuselage was missing, with the belly of the plane slumped on the tarmac.